There is a paucity of information on the PR company’s  website, and little critical coverage in the press. A lot of people have been in touch looking for more information about the proposed plan. Given the scale of this (12 acres) and the fact that it is primarily for large retail and Grade A office in the city’s cultural quarter, people rightly suspect it will be bad for the city, but want something more substantial to say on the matter, to be able to make a robust objection.

Well, Township has been compiling info sheets to give you just that.

There is a LOT wrong with this proposal, but we have to start somewhere. We’ve decided to distill the main issues down into three categories.

1. Form: how the development will impact on the built heritage and character of the area; access to public space, and the connectedness of the area with the surrounding city.

2. Function: how the development will impact on the Cathedral Quarter as the city’s cultural hub, what effect it will have on existing businesses in the area, and how viable the retail-led development is when we face the highest vacancy rates in the UK.

3. Process: how well the developers are meeting their statutory obligation to consult with stakeholders and what evidence basis there is that this development will benefit the city.

Here is the first of three simple graphics outlining the major problems with the *form* of the development. The issues are summarised to fit on a single page, and we’ve tried to limit ourselves to those that have a clear policy basis (that’s what those letters in brackets are).

Remember, you MUST email your concerns to CHagan@savills.com before 3 April. 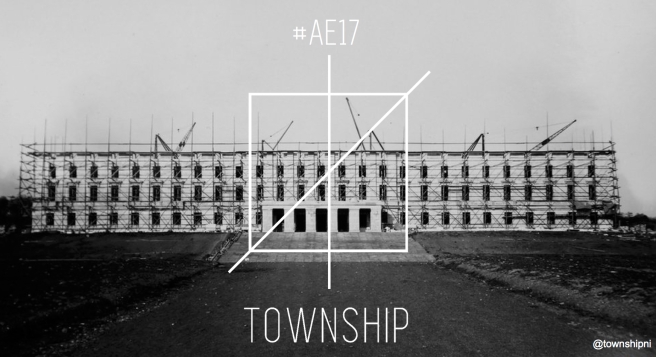 We then wrote to every candidate standing for election to the NI Assembly in 2017, and asked them if they support our policy positions.

To read some of the thinking behind the questions, click here.

Now for the results. 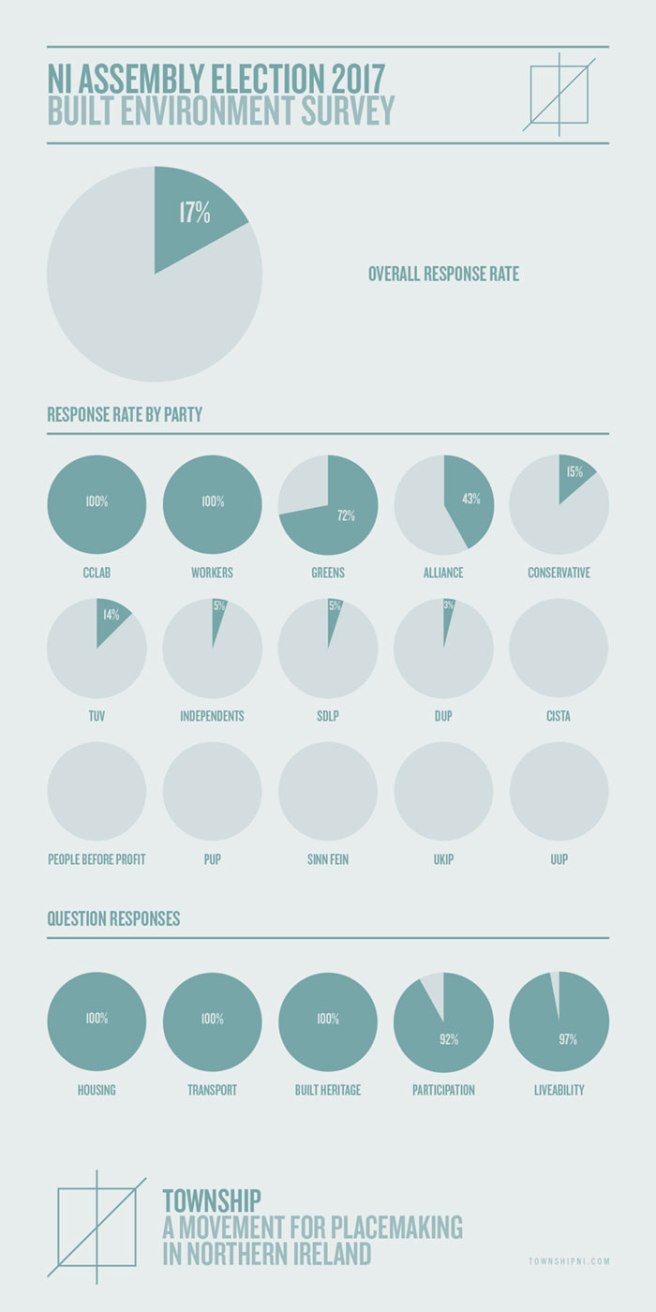 The overall response rate (17%), though disappointing, is also instructive. The survey was emailed three times, and we used Twitter to directly engage with candidates who use that platform. It is clear from the results below that the smaller parties are more responsive generally, and broadly support our policy positions.

Here are the questions we asked:

1.Housing: If elected, will you prioritise housing policy that repopulates our towns and cities, encouraging affordable, shared development, reusing existing structures and brownfield sites rather than building in open countryside?

2.Transport: If elected, will you prioritise low-cost public transport provision, safe and expansive cycling and pedestrian infrastructure, to reduce of the need for private vehicles, particularly in our towns and cities?

3. Built Heritage: If elected, will you prioritise the protection of our built heritage, including robust conservation policies, penalties for those who contribute to the dereliction and demolition of listed buildings, and reduce barriers to occupation and reuse of vacant heritage properties?

4. Participation: If elected, will you reform planning law to make it impossible to proceed to application stage without evidence of an open and in-depth process of pre-consultation with affected parties, establish Third Party Rights of Appeal, and sanction against failing to declare conflicts of interest on planning committees?

5. Liveability: If elected, will you prioritise the liveability of our towns and cities, ensure equitable distribution of amenities such as schools, libraries, arts provision, public space, and legislate for the management of vacant and unused properties to mitigate negative impact?

Additional | Transparency: We will be stating whether or not your party has named your major donors, and if so, for how long.  We will not be commenting on your stated policy, only on your actions.  If you would like to add a comment with regards to your choices on this issue, please do so when you respond to the questions above.

Select a constituency to see detailed responses from local candidates.

We’re happy to update these results, so if you’re a candidate and would like to let voters know your position on these issues, email townshipni@gmail.com and we’ll add your response to the tables.

Township is a movement for placemaking in Northern Ireland; composed of professionals, academics, & activists, campaigning for greater transparency and participation in how our towns & cities get shaped.

A quote from Jane Jacobs‘ definitive and unapologetically polemical 1961 The Death and Life of Great American Cities is a good place to start.

Neither an architect nor a planner, Jacobs was an unflinching trouble-maker. Shrewd and sensitive in her observations, her prescience about the direction of urban development has become more apparent with the passage of time.

What motivated her writing, more than anything, was the centrality of community to the health and resilience of cities; dense, diverse, slow-changing, well-connected neighbourhoods, and the citizen participation they facilitate, are the essential components upon which the success of the city depends.

Township is based on those same principles. It has come from anxieties similar to those that propelled Jacobs, more than 60 years ago, to wade uninvited into a conversation usually had behind closed doors, about what – and who – our city is for.

As I write this, we’re little over a week old – a nascent group of academics, professionals, activists, city-dwellers, friends, who want to do something. A snap Assembly Election was the motivation we needed.

Right now, our focus is squarely on our AE17 campaign. We want to clarify candidates’ position on a range of crucial built environment issues, and make the information publicly available and easy to understand. There’ll be more about that soon.

Our bigger ambition, after 2nd March 2017,  is to galvanise a public movement around issues that impact us in all kinds of profound ways. We hear, on social media, from friends and family, a lot of anger and frustration around things like affordable housing, the destruction of built heritage, or just the feeling of having no say in the changes that happen to our towns and cities. We think the first step in changing that is defining the issues, and giving our elected representatives the opportunity to take a firm stance.

Township is a movement for placemaking in Northern Ireland; composed of professionals, academics, & activists, campaigning for greater transparency and participation in how our towns & cities get shaped.